When you hear “Basque Region” do you know where that is?

This sanctuary of food and wine straddles France and Spain, including the area surrounding the Bay of Biscay and the Pyrenees Mountains. The Basques are an indigenous people, dating back thousands of years, and are the only people in the area to have survived the Roman conquest in the 3rd through 1st century BCE. While current-day Basque people have absorbed some of the French and Spanish cultures, they do have their own traditions and even their own language.

My trip to the Basque region began in San Sebastián, a seaside town on the Spanish side overlooking the Bay of Biscay. Most people associate San Sebastián with great restaurants, which is quite true. There are 18 Michelin-starred restaurants in this small city of 187,000 residents, more per square meter than any city in Europe, including Paris! 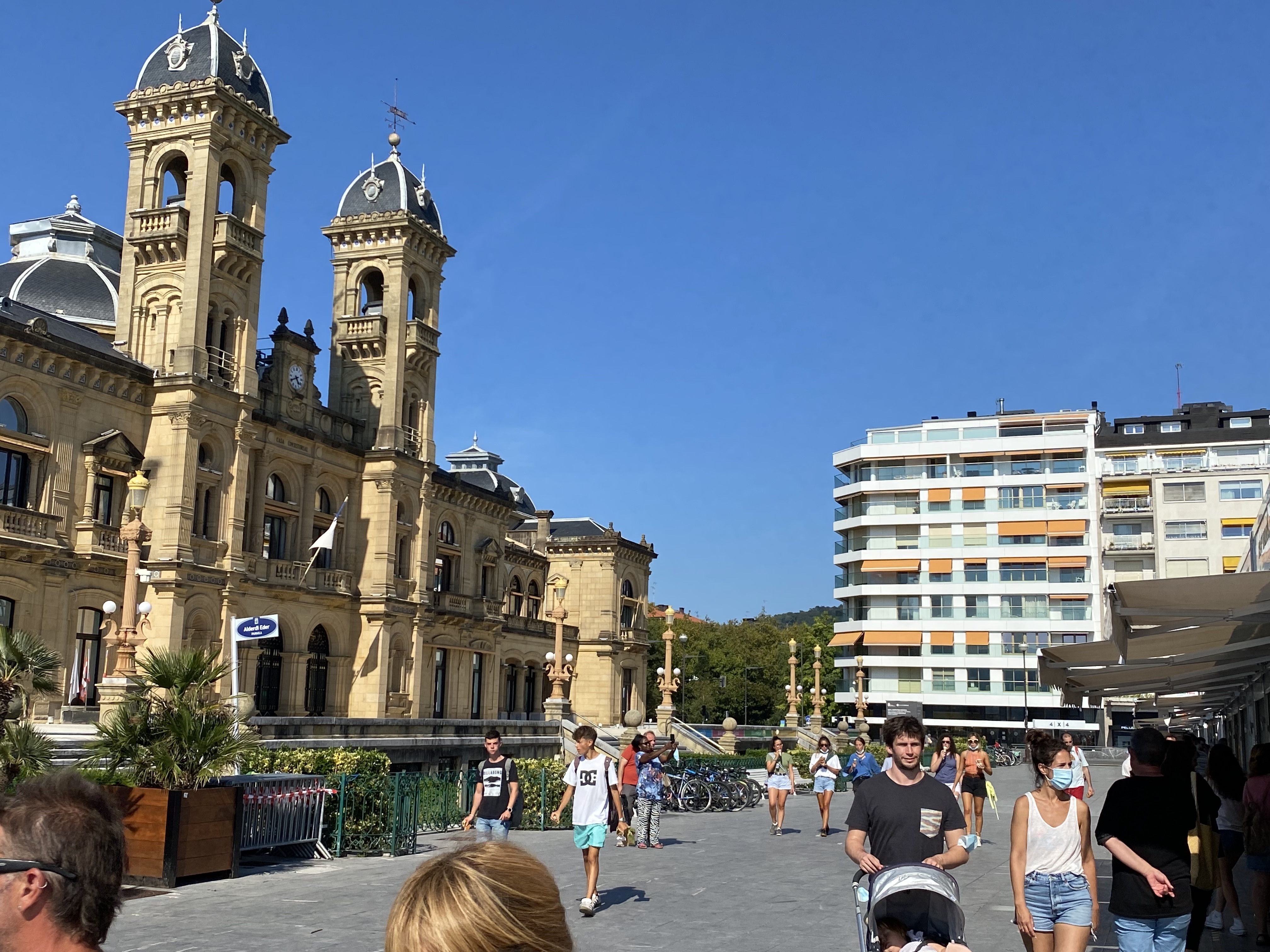 While Michelin-starred restaurants have their own special charm and clearly a place on many travelers’ bucket lists, I prefer to go to the local places which offer the most authentic food in a non-pretentious and charming setting. San Sebastián has countless places that fit this description, but the most fun of all is to have a meal at a Gastronomic Society. 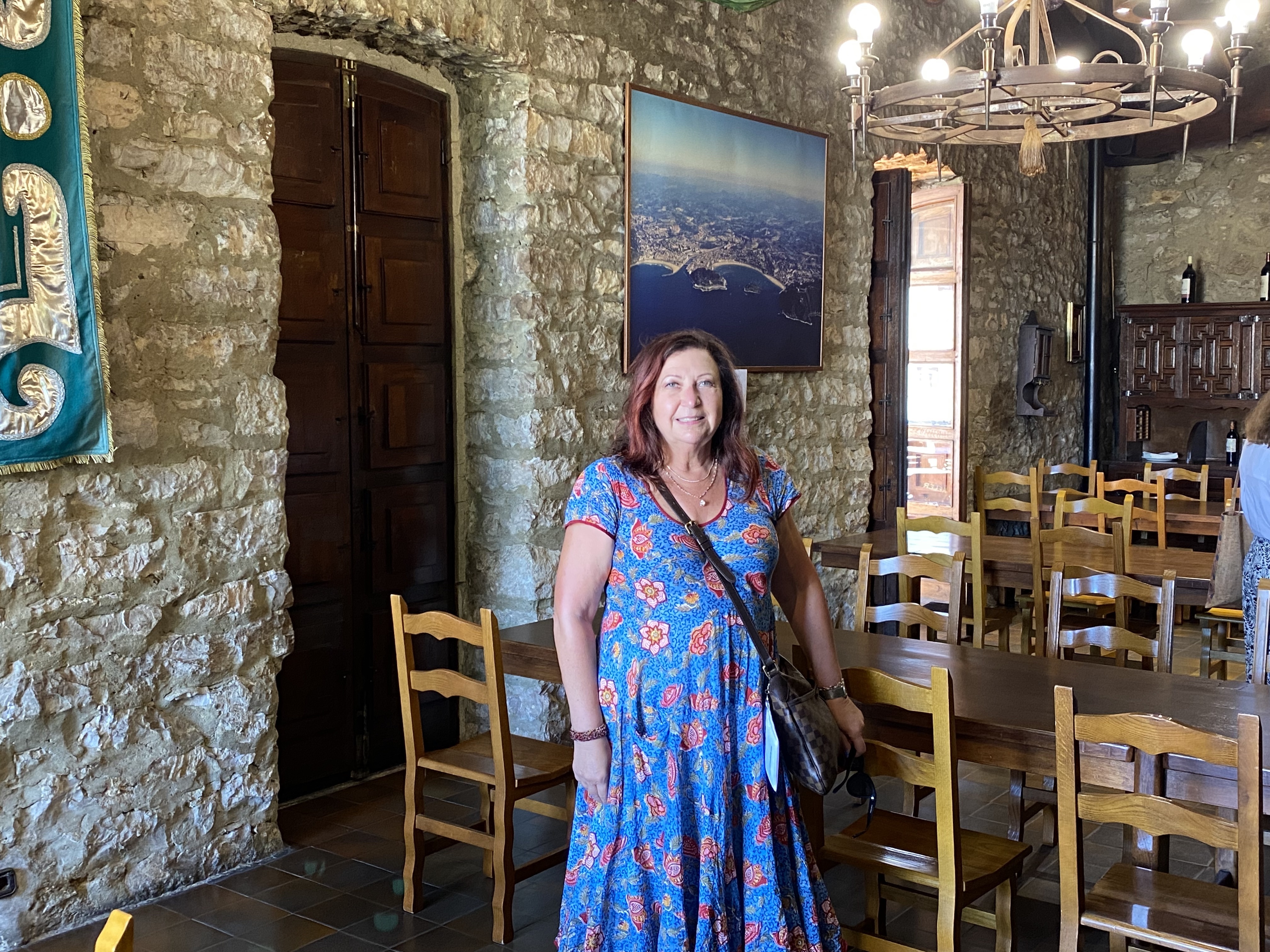 These eating clubs started in the 1820s after the city was rebuilt after having been burned down by the British in 1813. Apparently with no war to fight or town to rebuild, the men were bored and wanted to have a place to drink a locally produced cider and socialize. So they started renting out places to meet, and also added food to the mix, with the men doing all the cooking. You could always tell when a building was used for a Gastronomic Society because there was a flagpole out front.

The way to become a member was to have two other men vouch that you were a “decent” person that others would want to share a meal with. Until fairly recently, the Gastronomic Societies were men-only, but that has changed in recent times. In fact, when we visited one, our host was a female member, and not even a Basque woman. She was an American who emigrated to Spain and has lived in San Sebastián for over 30 years.

She explained the interesting customs at these meals, which occur at both lunch and dinner. For example, the meals are placed in front of you “mesa puesta,” like at your mother’s house. Two members do all the shopping, preparation, and cooking, purchasing the food themselves. When the meal is over, diners write out their own receipts and pay for what they consume, entirely on the honor system. This is used to reimburse the day’s cooks for the food they’ve purchased.

The cooks do everything except clean up. That is outsourced to a paid employee, whose salary is presumably paid from the membership dues. In order for an outsider to join one of these meals, you need to be invited by a member. When our Brian Carter Cellars group goes to Spain in June 2022, they will get an invitation and be able to experience one of these very unique meals at one of the 200 Gastronomic Societies in existence today.

Basque cuisine is generally hearty, and what many would consider comfort food. Lamb is served frequently, given that many Basques were shepherds. Since San Sebastián is a beachside city, seafood is also very common. You’ll see a lot of hake, a flaky white fish, and chiperons, the Basque word for squid, which is often stewed in its ink, making for a very black sauce tasting of the ocean. 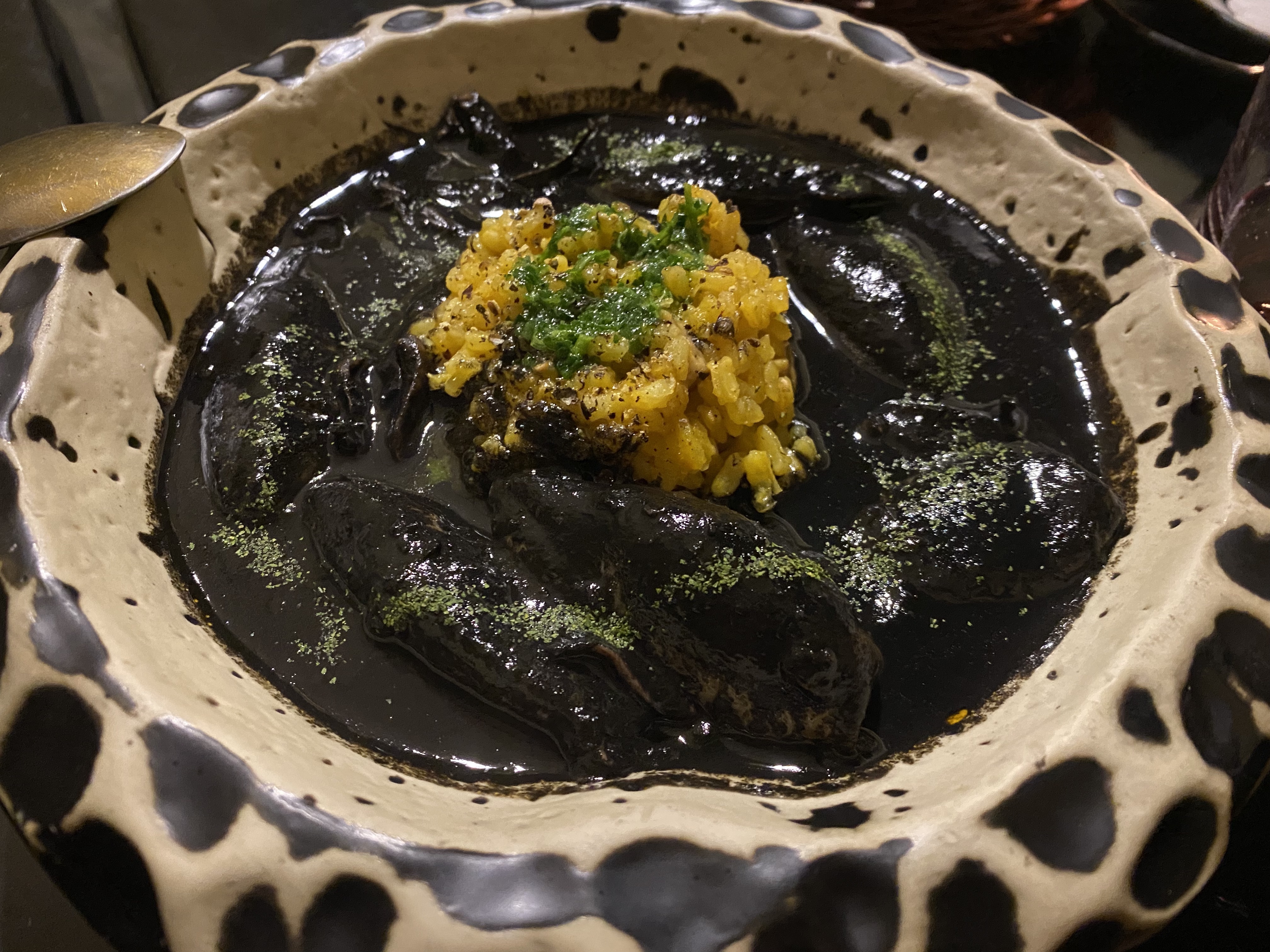 Although the region is not as well known for producing wine, the local specialty is txakoli (pronounced shock-o-lee), a white, dry and slightly sparkling wine served chilled. It never goes into a barrel and is drunk fresh—usually within a year of fermentation.

I did visit one local winery, Tali Verde, which produces 90% txakoli 10 % red. A lovely location, the winey made two impressions on me. First, because the vineyards are on steep terrain, they “borrow” the neighboring farm’s sheep to eat the leaves on the top of the vines, so that the grapes can ripen properly. My second impression came from seeing a portion of the Compostela, the pilgrim’s road which is the Camino Santiago (the Way of Saint James), one of the world’s most beloved travelers’ routes. I was fortunate enough to see a couple of young men with large backpacks, presumably heading toward Santiago on Spain’s northwest coast, some 500 miles away. 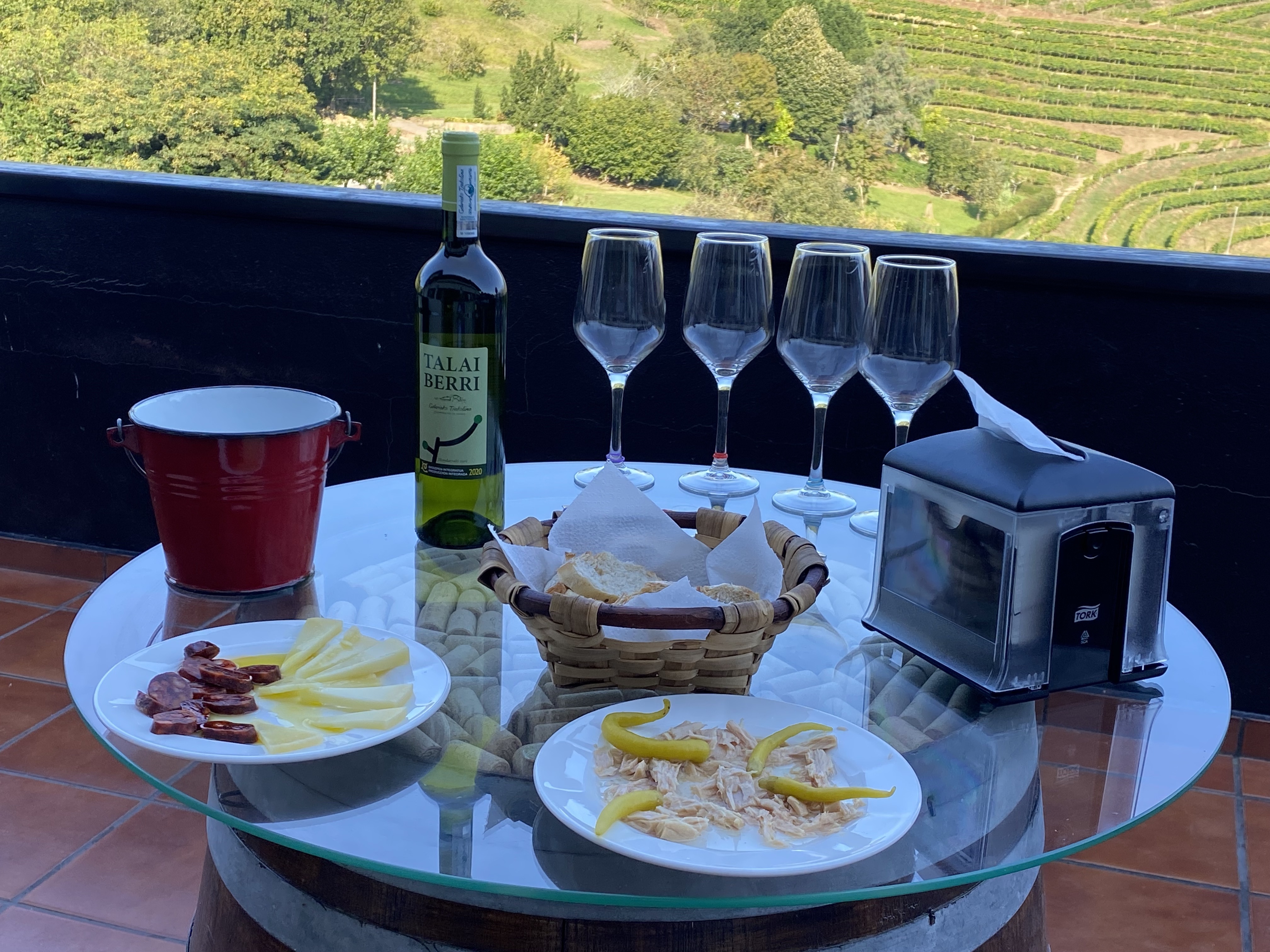 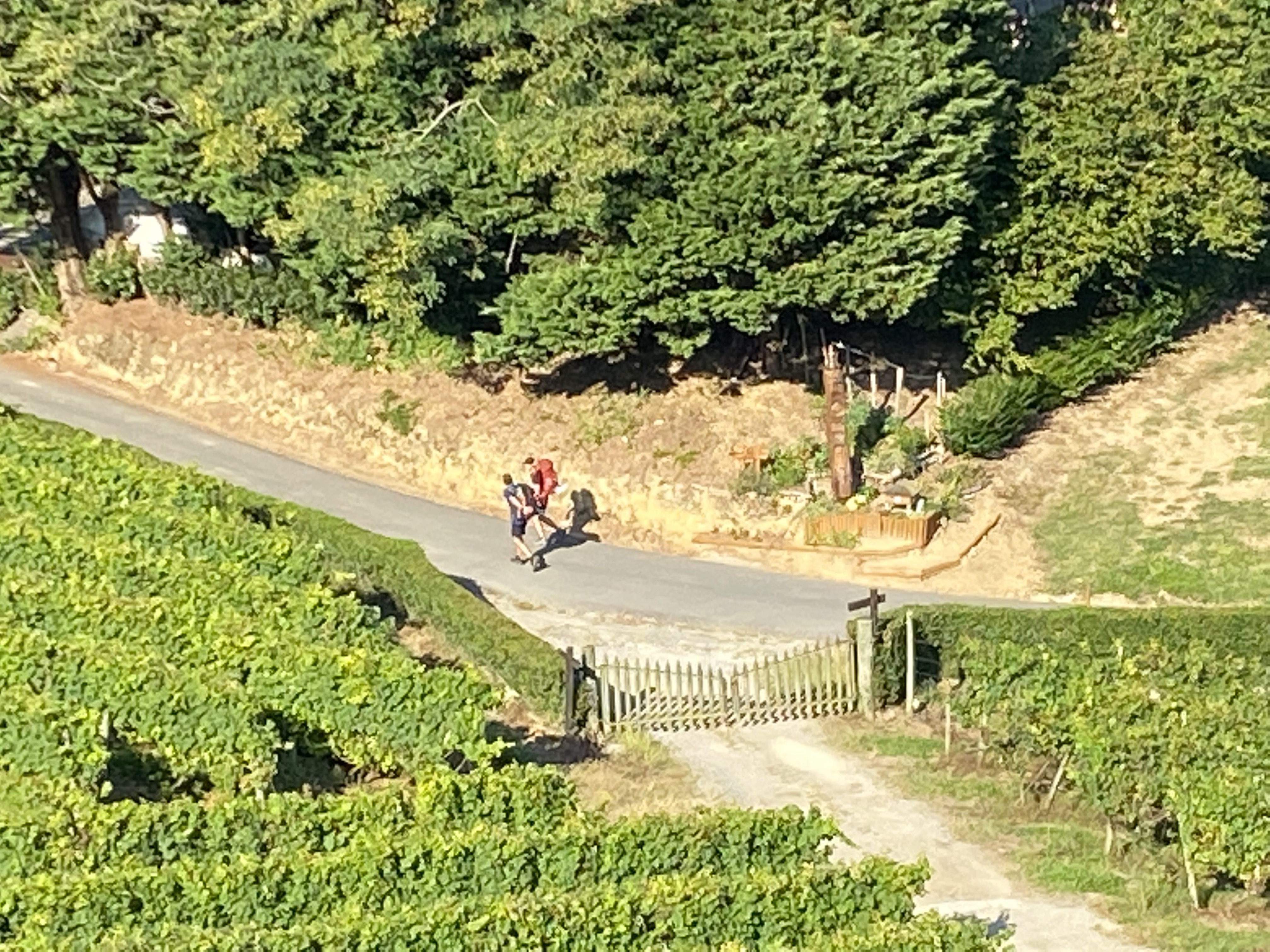 You can order other wines, but most come from the neighboring Rioja region, which will be highlighted in another post. Another popular drink is marianito, a vermouth-based cocktail mixed with gin, Campari, and Angostura. Both txakoli and marianitos dot the tables of the locals who enjoy them with pintxos, little snacks eaten in the early evening, to tide you over until dinner at 9 pm or later.

Alcoholic apple cider is a traditional Basque drink. Interestingly, apples are not a significant crop of the area, so they are shipped in from other parts of Spain. Cider houses are fun places to visit, if for nothing more than seeing how they pour the drink from the barrels in a long stream you catch in your cup. The exposure to air allows the cider to aerate and adds to the flavor.

Visiting the Basque region was fascinating beyond its food and wine, especially its language. Speaking of which, San Sebastián is not called that at all—its Basque name is Donostia, and that is what you see first on the road signs.

Whether you are on the French or the Spanish side, the Basque language is the same. It was originally more of a spoken language but has evolved into a written language as well. Depending upon whether you live in France or Spain determines how you are taught. French children are taught 50/50 French and Basque, while Spanish children may be taught immersion style (Basque only) or 50/50 Basque and Catalonian (formal) Spanish. The reason for this is that France is a very centralized country and Spain is not, with each area making its own decisions.

What I also found interesting is that once you cross the border, which is a bridge over a small river, the people speak either French or Spanish, but not both. I was at a border village on the French side getting my COVID test in order to fly back to the US, and the people in the pharmacy couldn’t communicate with my driver, who was Spanish. That astounded me because, to me, I could barely sense a border, yet people on each side are either French Basque or Spanish Basque!

I did spend a full day on the French side, which is dotted with wealthy beach towns and artisanal products. Probably the most famous town is Biarritz, which sits on the Bay of Biscay just beyond the last hill of the Pyrenees. In its heyday, it was the glamorous summer haven for celebrities from all over the world. Biarritz is also where Basque tourism began, probably because it is known as a major surfing destination. Today there are many surfing schools if you want to take up the sport. 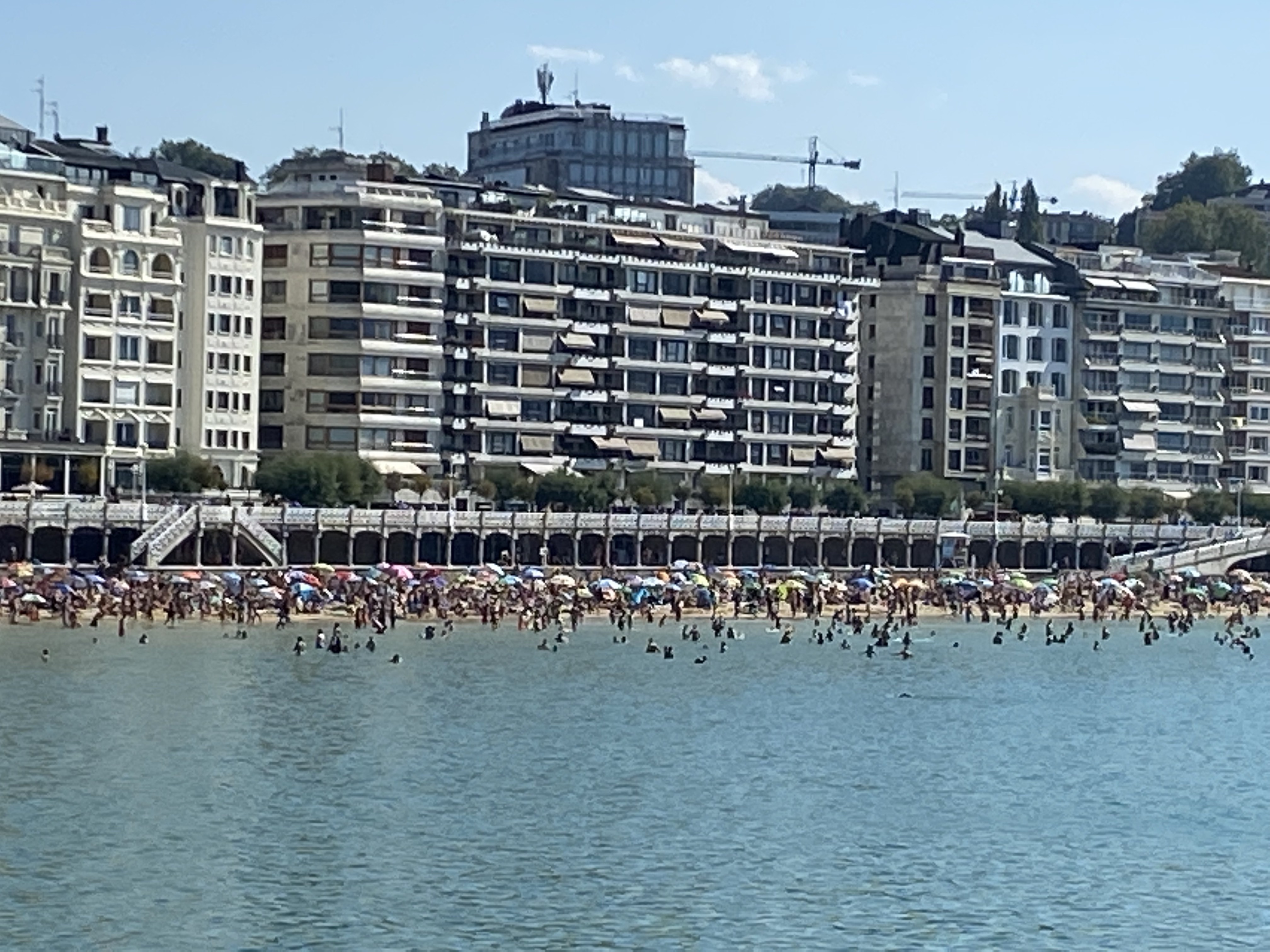 The major hotel is Le Palais, a grand old building built during the time of Napoleon III. Most recently it was the site of a G7 meeting in 2019. The town itself has a gorgeous white sand beach that is completely free to use (unlike French beaches on the Côte d’Azur, which are private and charge for entry). At the far end of the beach is a charming “town within a town” called Port de Pêcheurs (fisherman’s port), which is as rustic as Biarritz is glitzy. Here is where the professionals catch the seafood that is served in all the hotels and restaurants. Best to eat it right here, such as at Casa Juan Pedros.

Another foodie spot is the small but beautifully arrayed Biarritz market. Sparkling fish, giant rib eyes (beef is also big!), a cornucopia of cheeses, charcuterie and produce. Best of all, you can ask for tastes, then purchase small quantities for the best picnic ever. Which is exactly what I did, except the picnic didn’t happen until that evening. 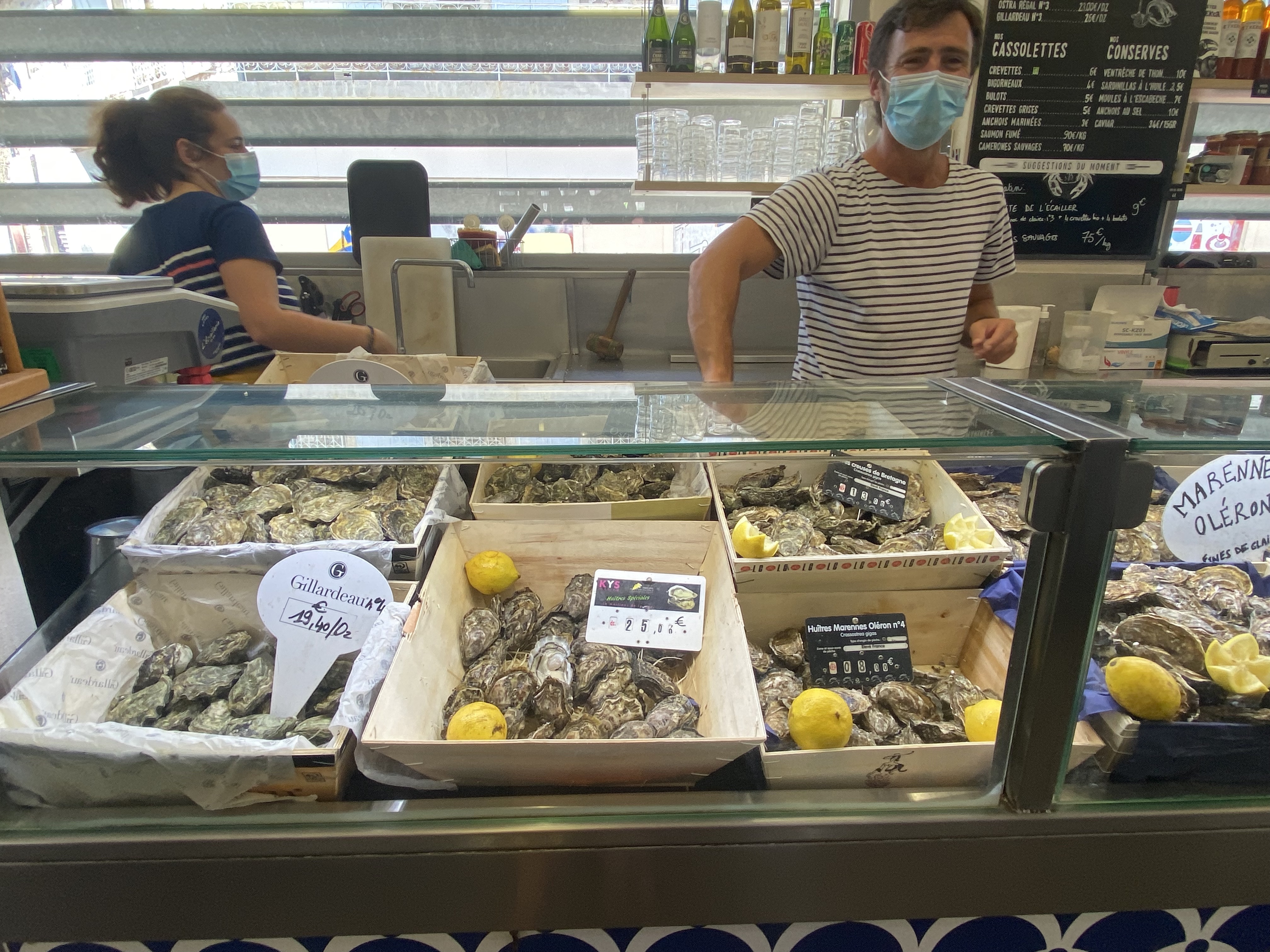 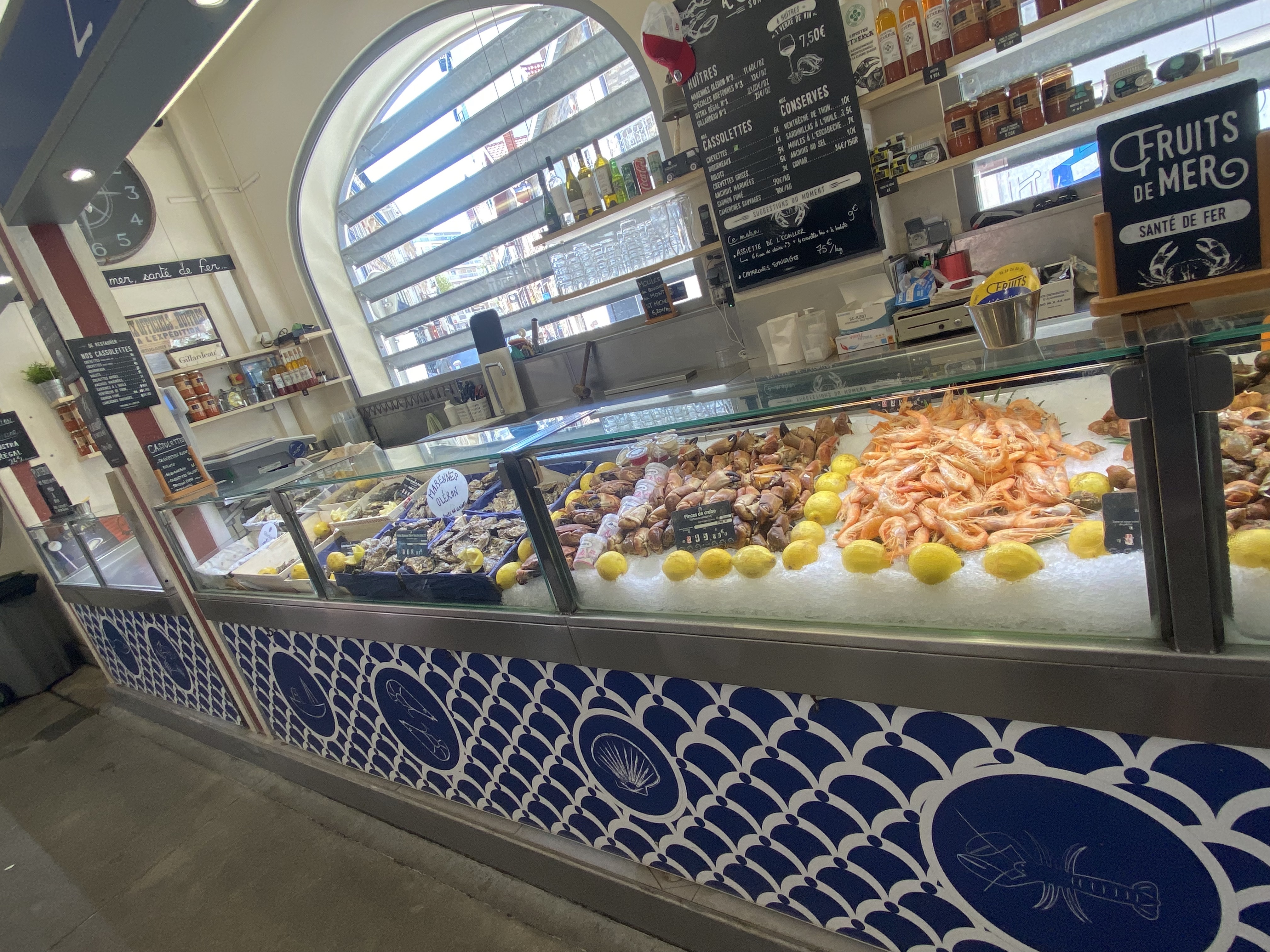 Before we left, I was tempted by this incredible deal—6 local oysters and a glass of wine for only €7.50 (about USD$9), but my traveling companions wanted to move on to our next stop, Saint-Jean-de-Luz. 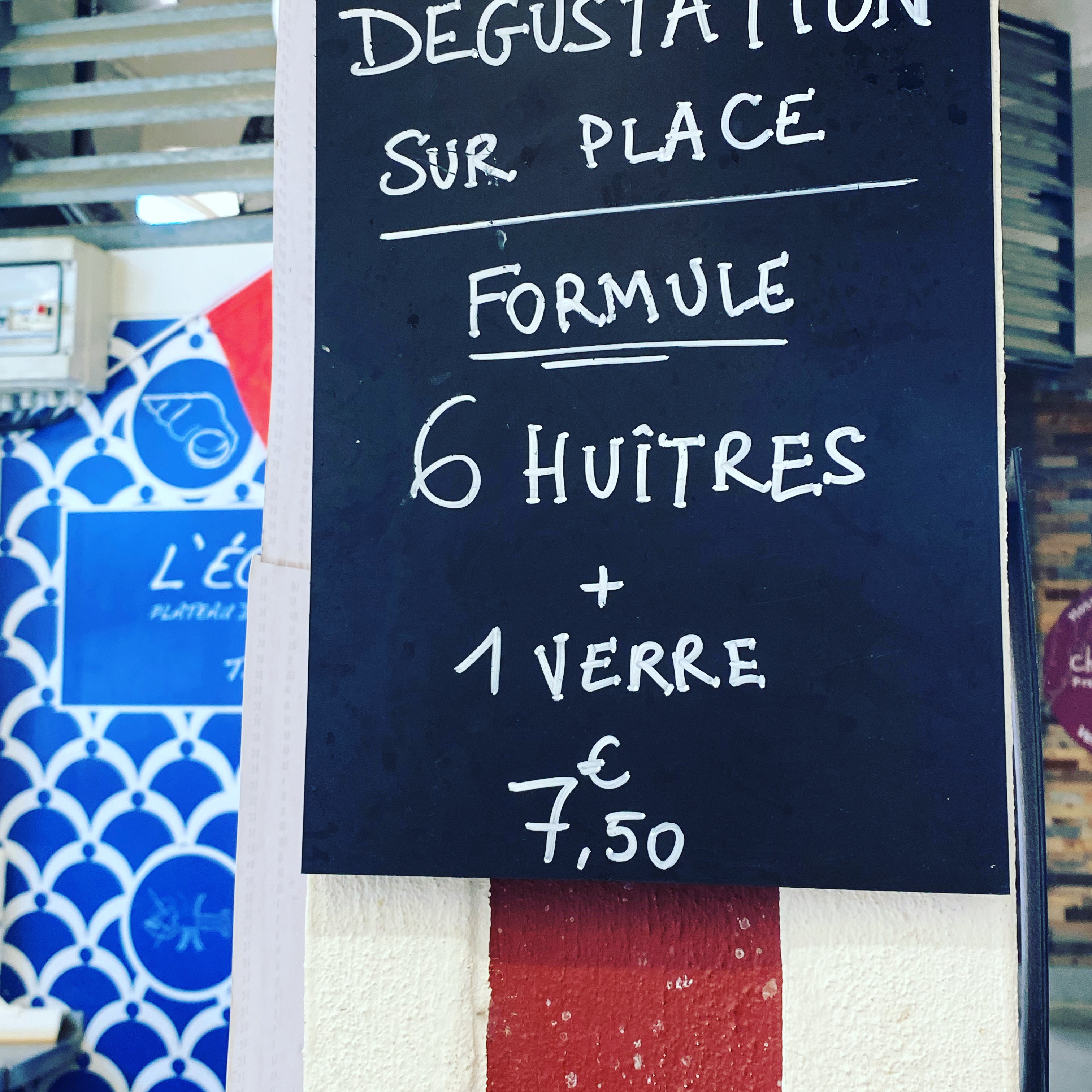 That’s because lunch was on tap at a charming tiny café Chez Pablo. No Michelin stars, but delicious local dishes including hake and chiperons, washed down with beer (not local, but definitely a local favorite!) and a glass of Irouleguy for me, a regional red table wine. I personally preferred Saint-Jean-de-Luz to Biarritz because it seemed more “real” to me. Not that it’s much less expensive. After all, this is still a glistening French beach town.

The last stop was at a pepper farm where they grow espelleta peppers, a slightly spicy red pepper that is regulated by the French government just as much as they do for wine. There is actually an AOC (appellation) for these peppers, which prohibit irrigation, regulate when new plants can be planted (no later than July 14, ironically which is Bastille Day), when harvest can take place (starts around August 10 and must be complete by December 1) and how many peppers can be harvest per plant (20). 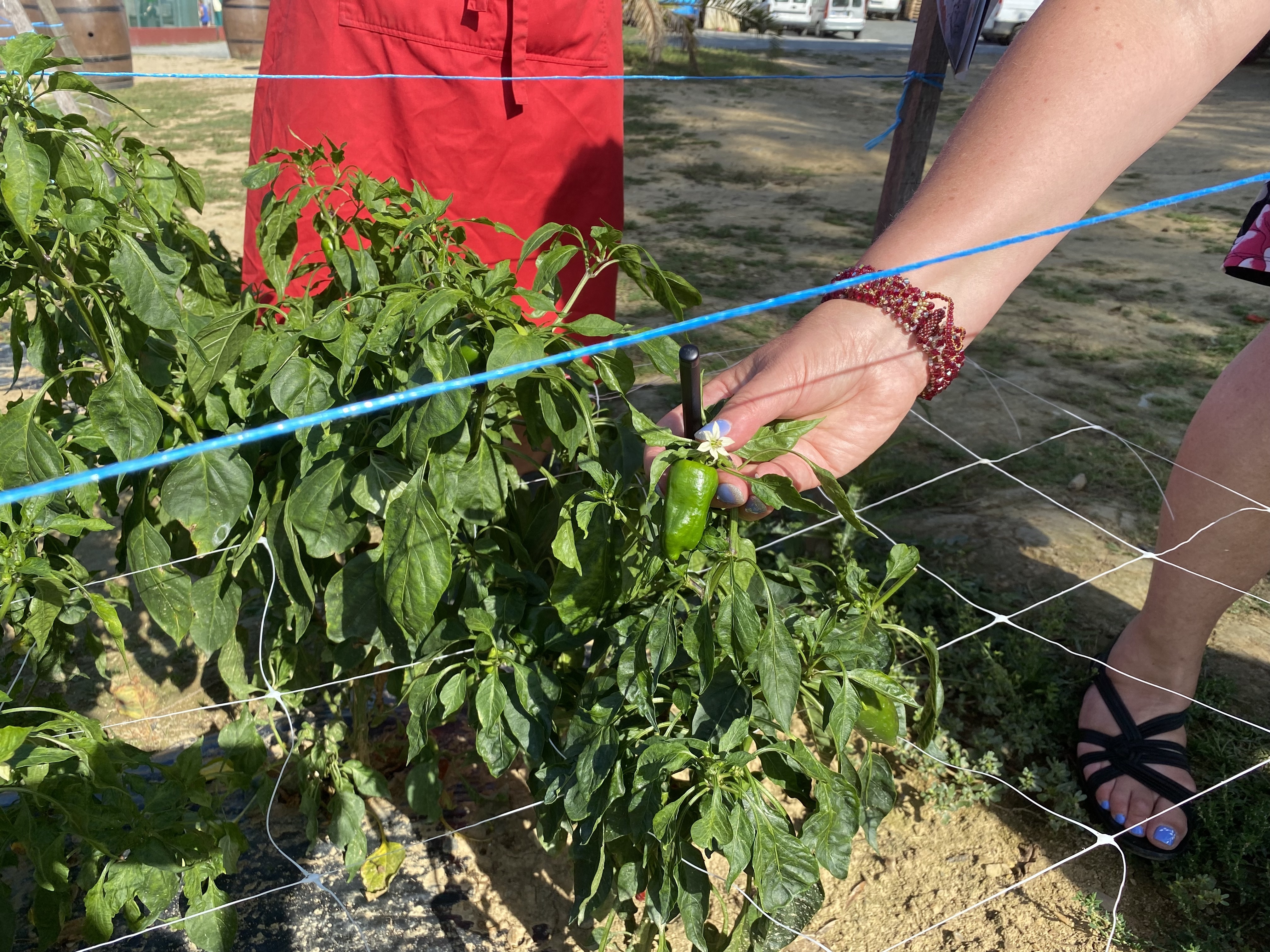 Many of the peppers are dried and ground into a powder, which is used as a seasoning (the remainder are canned or brined for other uses.) Once harvested, the peppers are opened and placed in an oven to dry. The Syndicate, which issues the all-important AOC stamp necessary to sell the peppers, has two major roles. First, they determine pricing. Even more daunting, they come to examine the peppers being dried in the ovens. If even one pepper is not approved, the farm has to destroy all the peppers in the oven! Adding further to the problem, the farm has to wait an entire year to try again. 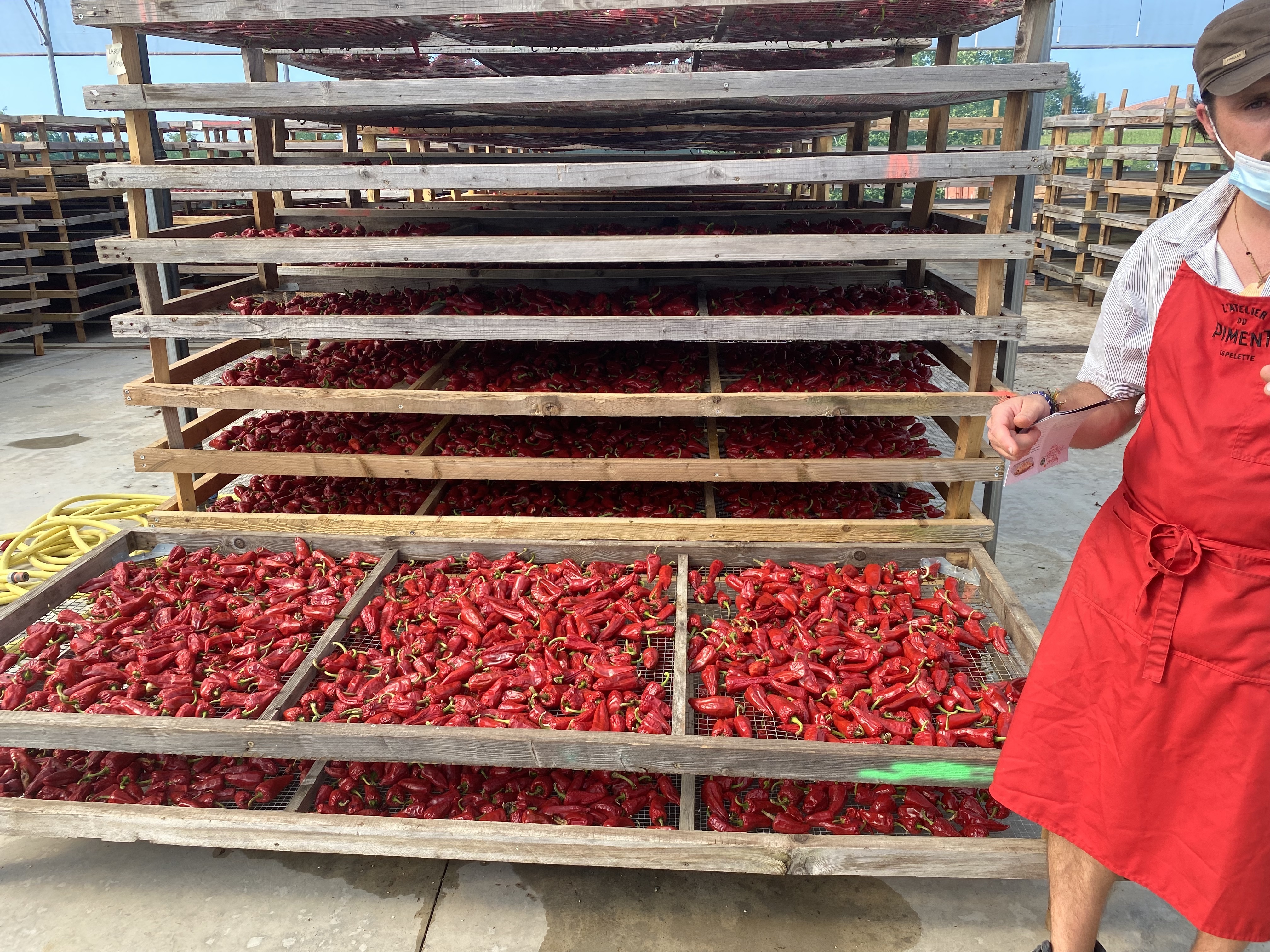